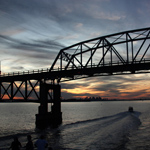 This is the question on the minds of many a Squantumite since Mayor Walsh announced his intention to rebuild the bridge to Long Island during his inaugural speech on New Years Day, taking Quincy Mayor Koch and residents by surprise. On May 8, Mayor Koch, City Councilor Bill Harris, and Representative Bruce Ayers will host a informational meeting to review the public safety concerns of the proposed Long Island Bridge construction, what is known about the City of Boston’s plans, and what actions the City of Quincy is taking in opposition to the reconstruction.

The bridge to Long Island was demolished in 2015 following an abrupt closure on October 8, 2014 due to structural failures that left dozens of social services scrambling for alternate locations. The decision to rebuild the bridge is controversial, with many weighing in to propose alternate options, including using waterways to reach the Island, rather than traveling from Boston, through Quincy, and Squantum specifically, to reach the island.

Boston Mayor Walsh moves ahead with plans to reconstruct the bridge

In recent years, Boston Mayor Marty Walsh has expressed uncertainty about the decision to rebuild the bridge, citing issues in raising the estimated $40-$100 million price tag. However, in recent months Walsh has moved solidly forward with a plan to rebuild the bridge and has allocated up to $92 million in funds for the project. He is positioning the rebuilding of the bridge as a necessary component in fighting the opioid epidemic. According to a Patriot Ledger article, the city intends to begin bridge construction in 2019 and complete it within three years.

A Boston Globe article notes that city budget documents announcing the plan state that, “The mayor will also set the stage for planning the comprehensive, long-term recovery campus [on the island] that the city and state desperately need to tackle the opioid crisis.”

In the days and weeks since the New Years’ announcement, Quincy Mayor Tom Koch and other city of Quincy officials have shared their thoughts on alternate proposals for access to the island in addition to demanding a seat at the table as the City of Boston plans the construction of the bridge. To date, aside from a phone call from Walsh to Koch shortly ahead of Walsh’s inaugural announcement, no engagement has occurred. While many agree that social programs are of paramount importance to fighting the opioid crisis, not everyone agrees that a bridge to Long Island is the single solution to providing access to programs and support.

Alternate proposals include using ferry services to and from the island. However, Mayor Walsh has expressed concern that island access via ferry could be disrupted during winter months which could be challenging for a medically vulnerable population.

As the City of Quincy considers options, Mayor Koch and Ward 6 Councilor Bill Harris have proposed a city ordinance that would ban commercial and construction vehicles from roads that lead to Long Island, specifically on the eastern end of Dorchester Street and Moon Island Road. The proposal was introduced to the council last week and protects delivery vehicles for businesses in the area, including the Nickerson VFW Post. Other ideas proposed at the meeting included filing an ordinance giving the Quincy City council final authority over any permits for bridge construction, and subpoenaing Mayor Walsh to testify before the council.

Following the bridge closure in 2014, Representative Bruce Ayers posted an opinion piece in the Patriot Ledger calling for a comprehensive cost-feasibility study to determine the most cost-effective means of transportation to the island. Since that posting, Rep. Ayers has filed legislation calling for a study to be conducted. A hearing was conducted with the Committee on Transportation in January 2018 and the matter has been referred to the committee on House Rules.

Ayers’ 2015 opinion piece noted that the average daily use of the Long Island bridge was approximately 400 vehicles per day and that, according to the MBTA, approximately $3.7 million was spent annually on bus transportation to and from the city services on Long Island prior to the closure of the bridge. At the time of the OpEd, Ayers shared that the estimated cost to construct a pier for Long Island that could handle a ferry service was $2 million, and estimates to operate a daily ferry to and from Long Island were $300,000 to $400,000 per year. As noted, he proposed a study be conducted to determine actual costs.

The next few months are sure to bring more debate. Attend the meeting Tuesday night to learn more about the actions being proposed by the City of Quincy.

Update May 9, 2018: News coverage of the bridge meeting

1 thought on “To Bridge or Not to Bridge…the Long Island question; May 8 community meeting planned”