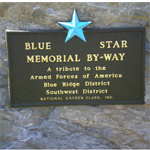 The Seaside Gardeners of Squantum are currently raising funds to place a Blue Star Memorial By-Way plaque at the Squantum Fire Station to commemorate and honor all men and women who have served, currently serve, or will serve in the Armed Services of the United States.

History of Blue Star Memorials
The Blue Star Memorial program was created in 1945 at the close of World War II by the National Garden Clubs, Inc., as a means of honoring men and women serving in the United States Armed Forces. Garden Club members visualized a living memorial, helping to beautify and preserve the country these men and women had fought for. In 1944, the first memorial came to be – a thousand ﬂowering Dogwood trees planted along ﬁve miles of New Jersey highway, designated the Blue Star Drive by the Legislature. The goal of the Memorial program was to create a “ribbon of living memorial plantings traversing every state.” Garden Clubs around the nation responded enthusiastically.

Today, the mission is to honor all men and women who have served, are serving, or will serve in the Armed Forces of the United States, and in 1981 the program was expanded to include By-Way Markers, to be placed in areas such as parks, and civic and historical grounds as a tribute to the Armed Forces of America.